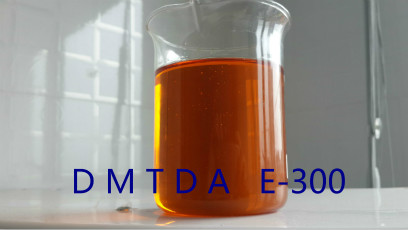 Test results of the detection index of the project enterprise

Two trimethyl amine content% sulfur based toluene is less than or equal to 1 0.2

Three, product use and product advantage

A novel polyurethane elastomer curing agent, of which there are two isoforms that 2,4 - and 2,6 - dimethyl sulfur based toluene diamine mixture (about 77~80/17~20), and usually use the MOCA compared to room temperature is low viscosity liquid, can be used in low temperature operation chemically using low equivalent.What Is Two Methyl Two Amine?Dimethyl Thio-Toluene Diamine (DMTDA)

Dimethyl sulfur based toluene diamine curing agent chain extending agent DMTDA is a model of elastic polyurethane curing crosslinking agent, equivalent to Ethancure 300 of which mainly compared two isomers that 2,4 - and 2,6 - dimethyl sulfur based toluene diamine mixture (about 77~80/17~20), and usually use the MOCA and room temperature is low viscosity liquid, can be used in low temperature operation chemically using low equivalent. DMTDA is a low toxicity and environmental protection type liquid diamine chain extender, mainly used for polyurethane elastomer, rim (reaction injection molding), SPUA (spray polyurea elastomer) and the adhesives. At the same time, it may be used as curing agent for epoxy resin, has been widely used in polyurethane rollers, medicine, stamping molding. In addition, it in cars, metal mine, textile, papermaking, printing have widely application.

Curing agent chain extending agent DMTDA cure rate is much slower than DETDA, can be mixed with DETDA in different proportions, to adjust the curing speed to meet different needs.

1, two a sulfur based toluene two amine -DMTDA hindered aromatic two amine, a sulfur based and methyl group of the role of resistance to its activity than TDA and DETDA low, it is with the pre polymer reaction rate than DETDA 5-9 times longer.

4, the equivalent of 107 low (MOCA 133.5), the same amount of curing prepolymer with low consumption cost.

5, the synthesis of PU (polyurethane) and alkali resistant performance is better than that of MOCA curing products, better injection type elastic effect.

7, compared with the traditional curing agent Moca, dimethyl sulfur based toluene diamine -DMTDA has many advantages: is a liquid at room temperature, easy to use, can be cured at room temperature; the mechanical properties of the cured material with MOCA comparable compared with foreign similar products, physical and mechanical performance is basically the same, a lower price, product cost is reduced, so the product is an ideal substitute for the traditional curing agent.

Two methyl two amine -DMTDA is a low viscosity liquid at room temperature, it has good fluidity, so it provides flexibility for the blending of the pre polymer and the curing agent, so it has the following advantages:

1, good compatibility with other components;

2, in the content in the pre NCO% content is low, it needs to cure time shorter than the MOCA, which is more favorable to the operator.

3, the NCO% content in the pre polymer for a long time, due to the high reaction activity, it needs to be cured, a long time, which is particularly beneficial to the operator.

4, in the same NCO% content of the equivalent value of DMTDA (107) than MOCA (133.5) to be small, so it is less than the amount of MOCA.What Is Two Methyl Two Amine?Dimethyl Thio-Toluene Diamine (DMTDA)

One hundred and five

One hundred and twenty

One hundred and fifteen

1, income dimethyl sulfur based toluene diamine curing chain extender DMTDA agent products at room temperature viscosity was significantly larger than that of the ETHACU RE300. Known in the fabrication of poly ammonia cool elastic body, whether is prepolymer method or semi pre polymerization method, prepolymer group has higher viscosity, two groups of mixed as similar viscosity are more likely to be evenly mixed; and general mixed to of two groups of insulation. Even if the room temperature mixing and solidifying, the viscosity of the product on the process does not have any impact, so relative viscosity larger on the application had no effect.What Is Two Methyl Two Amine?Dimethyl Thio-Toluene Diamine (DMTDA)

2, the appearance of the color than ETHACURE300 deep. This is the product of the shortcomings of the product in the poly ammonia cool light products in the application of very.